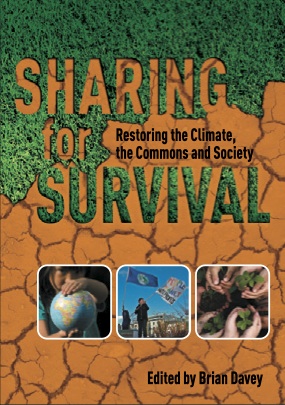 Welcome to the online edition of Feasta’s book, Sharing for Survival, a 200-page collection of essays by nine Feasta Climate Group members. The book’s editor, ecological economist Brian Davey, is a long-time Feasta member and co-ordinator of the Cap and Share campaign for cutting carbon emissions.

Other authors include Nick Bardsley, James Bruges, John Jopling, Justin Kenrick, Laurence Matthews and Caroline Whyte. The book concludes with the final piece of work by our much-loved late colleague, Richard Douthwaite, with help from David Knight: an essay entitled “Time for some optimism about the climate crisis”.

The UK launch of the book took place on April 13th 2012 in Machynlleth, Wales, as the order price viagra soft online kick-off for the Feasta Climate Group weekend. The Irish launch was held on May 18th in Cloughjordan, Co. Tipperary, the home of Ireland’s first eco-village.

Sharing for Survival recognises that official climate policy is dominated by states in thrall to fossil fuel and financial lobbies. It offers a realistic radical way to rapidly reduce emissions through stabilising the economy and ensuring social justice. Its authors explore climate policy in a way that ensures social justice and equity matter, recognising that the UNFCCC process is going nowhere. They explore the impact of fossil fuel depletion on the climate crisis, and challenge the idea that the climate crisis can be resolved in a growth economy. They also:

This book offers a historically rich and generic viagra pills nuanced introduction to a concept that could not be of more pressing importance for the twenty-first century.

What people are saying

“This is a great book. It is packed not with cockeyed optimism, but with reasoned hope and proposals for action […] At its core is the belief that citizens must and can protect the commons, those gifts of nature and society that belong to all of us.”

– Peter Barnes, author of Capitalism 3.0: A Guide to Reclaiming the Commons
Read more

“An interesting book with some really good material […] It contains a wealth of useful information and ideas. A key emphasis is on ‘commons approaches’ that recognise that the environment and its resources belong to all of us and should be managed collectively and online generic cialis 24h not via the money system nor by top-down direction.”

“This book is a very welcome and understandable response to the dwindling momentum of attempts to deal with climate change at the global level…[it] recognises that climate policy in general, and cap and share in particular, must be developed against the widespread inertia now existing.”

– Frank Barnaby, former director of the Stockholm Institute for Peace Research and professor of Peace Studies at the University of Delft
Read more

“This book recognises that action on climate change cannot come from governments unless it is first driven by the people. This requires wide-ranging social transformation, and its calls for land reform as one driver for such community empowerment are especially refreshing.”

“This book develops the idea of “cap and share” in which a limited number of permits to use fossil fuels are sold and amoxil online the revenue shared among the population, either of one country, or the whole world. A key piece in the jigsaw is already in place — we already know how to distribute such funds […] nothing new need be invented. “

– Joseph Hanlon, co-author of Just Give Money to the Poor: the Development Revolution from the Global South