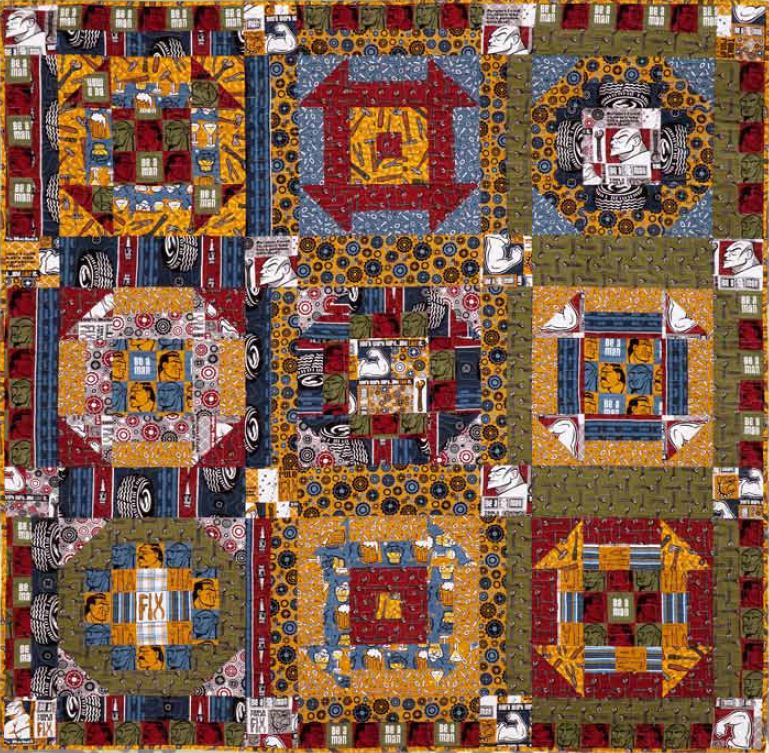 As the different authors wrote this book it became clear that each of us had very different perspectives on how climate mitigation could be achievable. We all started with a common sympathy for a policy called “cap and share” but even that unravelled to some degree.

To explain: the policy of Cap and Share would mean that a reducing ceiling, or cap, would be imposed on fossil fuel suppliers through a “permit to sell carbon fuels” scheme. The fossil energy suppliers would have to purchase a reducing number of permits. The money raised by the energy suppliers purchase of permits would be available to share with citizens in various ways.

We all started out liking that idea but then discovered that we had different views of how to organise the ‘share’. Part of the book is about this difference – and it touches on something rarely discussed in climate policy – how to ensure that climate policy is fair to individuals, households and communities. Issues like this are crucial if climate policy is to gain public acceptance yet they rarely get discussed.

In summary readers will find the following divergences:

Although the book set out to be for a general lay readership it is clear that we nevertheless have different target audiences. For some of us, effectively, the chapters have been written with an assumption that our ideas might reach and influence government and “inter-governmental” policy makers. For example one of the arguments put forward by the late Richard Douthwaite was for governments in oil importing countries to set up an oil importers cartel. This is a macro-economic policy for the period after “peak oil” aimed at managing the energy market in a way that would stabilise the international economy. Richard argued that this would be in the interests of fossil fuel exporters and importers because as depletion proceeds, a spike in the price of oil and gas as depletion proceeded would crash the world economy and the price of fuels would crash down again. His view was that this would be against the interests of exporters too. There is no need to go into the argument further here – the main point here is to point out that this is an argument about what governments might do. By way of contrast, many of the other chapters have been written with scepticism that governments are capable of delivering any kind of climate action, at least at this stage – even where a case can be made out that there is good reason for common action.

What forms for global climate governance and how to arrive at them?

Another viewpoint in these pages is that it is necessary, and hopefully possible, to strive towards a directly established international climate policy regime with new institutions. This is in contrast to the current approach where each government, albeit sometimes working as part of a negotiating block like the EU, offers what it is prepared to contribute in the UNFCCC negotiations. In theory the aggregate global climate mitigation effort will then emerge out of the sum of all the offers added together. The contrasting approach put here is to start out taking a whole world view, set up global world institutions appropriate to this view, and then to work towards governments ‘buying into’ the global arrangements.

The main actors in this kind of process, and hence the main audience to whom we would be addressing ourselves, are those with the most credibility in global civil society, independent of government and independent of corporations. It is they that must agree, organise and evolve the organisation and policies first and foremost. That said, one must acknowledge that a civil society process can only ever get so far if it does not at some point engage with and enlist the support of governments who would then be able to bestow the authority to impose particular policies.

The contrasting approach is connected to the view that the earth’s atmosphere is a global commons and should be managed as such, in the interests of everyone, independently of states and corporations. Out of that would hopefully come something like a global Cap and Share scheme and other global policies to improve carbon sinks, to deal with methane, N2O, halocarbons, black soot and so on.

But as we wrote divergences emerged here too. As one author, Justin Kenrick put it about the approach just mentioned, this perspective “wants a way to say the global commons is possible and that governance structures flow from that, whereas my sense is that there are only ever local commons which can flow together to overthrow state structures and from that regain the global spread of relocalising commons regimes.”

So, Justin Kenrick’s perspective is off in a very different direction. His focus is on people’s movements and the relationship between communities and their resources in their local environments, developing a climate policy out of that. When we started to write this book there was no such thing as the Occupy Movement that has spread all round the world. Now that it exists different styles of politics and different vehicles for change are becoming visible. A perspective of change from below, perhaps in the context of a generalised banking and financial system collapse, becomes plausible – and it adds to the plurality of perspectives in this book.

Then, as mentioned above, it is clear that there are different ‘angles’ on the ‘share’ in Cap and Share. When one of our authors, James Bruges, explained Cap and Share to a group in India they did not like the idea of a per capita share of carbon revenues going to individuals. This has prompted James to write the piece that he has. In complete contrast, another author, Caroline Whyte, points to the experience of giving cash to the poor in ‘developing’ countries and finds it to be positive.

Even a cursory look at these different points of view makes it obvious why divergences emerged. There’s a jargon phrase to describe the climate situation – it is what is called a “wicked problem”. Assessments of the degree of seriousness, causes, contexts and solutions for the climate problem have a high degree of uncertainty and contestation. There are multiple stakeholders and interest groups affected in quite different ways and to different degrees. As a global problem there are, and have been, multiple solutions put forward for multiple parts of the problem by multiple actors. The climate crisis is connected in many and complicated ways to many other kinds of problems – such that things that might be helpful as climate mitigation can make other problems worse.

In these circumstances it would surprising if we did not face fragmentated viewpoints. That’s what a “wicked problem” is like. It defies easy concept- ualisation.

With a caveat spelled out in more detail below, this diagram, called the Stacey Matrix, is quite helpful to clarifying the sort of situation that we are in. 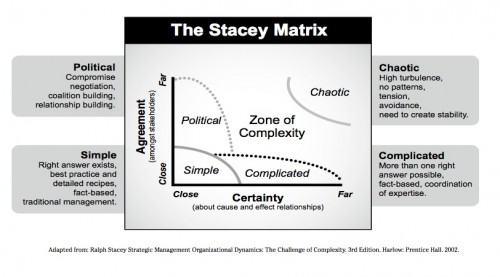 The climate crisis is a problem where there is a great detail of uncertainty – not, I hasten to add, about the basic science – but certainly about the contexts in which climate policy is evolving. There is also a good deal of manufactured uncertainty created by vested interests, keen on promoting doubt and denial in order to achieve inaction – which would suit their short term financial interests. At the same time, in regard to the vertical axis there is very little agreement – so the scope for compromise, negotiation, relationship building seems to be low.

We are therefore operating in the “zone of complexity” and neither simple prescriptions, “right answers” about what is to be done about climate change, nor political formulae for deals, nor the co-ordination of a huge amount of expertise is enough to come up with “the right answer”.

Yet some answer must be found… unless one says, as has author, Clive Hamilton, that the battle against runaway climate change has been lost… but even then Clive Hamilton does not conclude that there is nothing more to be done. (We have had differences on Hamilton too – to Richard Douthwaite Hamilton’s view was an anathema. Richard felt strongly that we should be optimistic. Speaking only for myself I’m not that sure, I think our situation is pretty desperate but that people are often at their finest when their backs are to the wall. This however depends on acknowledging how bad things are first).

A patchwork quilt of solutions

Once upon a time, I was a Trotskyite who thought one had to have a unified line which everyone followed in order to achieve fundamental changes in society. I tend to believe the opposite now. I see more use in a patchwork quilt of approaches and solutions, some of which may not match. In a natural crisis, that’s how biodiversity works. In the diversity of species with a wide range of characteristics there are some that are able to thrive in a general eco-system collapse. They become pioneer species, starting the evolution of a new system.

In confusing times one approach that makes sense to me is to put lots of seeds out trying lots of different things. The more approaches that are tried the more likely some are to work. As we are not all approaching the climate problem, and the limits to growth situation, from the same place we do not have the same connections, or the same resources, the same knowledge and ability to apply ourselves to a common unified path. It is inevitable that we try different paths. There’s a metaphor that is commonly used in discussions of spirituality that the view from the top of the mountain is the same. However because we are starting out from different points, the path up the mountain will be different.

So we should not be afraid of difference. We can compare our different experiments. We can go our different ways and try to create frameworks or maps which relate the different approaches that we are taking to each other. In fact, different approaches, while they may appear to be alternatives between which choices must be made, often turn out to be complementary – as when it is necessary for someone to take an extreme view which hardens the negotiating position for someone who is more prepared to compromise because they see a danger in extreme conflict.